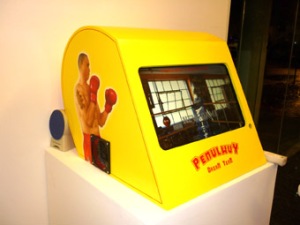 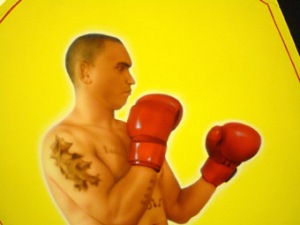 Pemulwuy Dream Team is an interactive boxing game inspired by the legend of Pemulwuy who led Indigenous resistance to European settlement in 1788. The game grew out of animation workshops conducted during a Performance Space residency at the Redfern Community Centre in February 2008. The participants were asked to create a Pemulwuy “Dream Team” to continue the fight for justice but in the contemporary context – exploring the complex interaction between community, space and identity on The Block.

The game was filmed in the famous Tony Mundine Gym, training centre for Champion boxer Anthony Mundine and involves local residents who assume the identity of boxing heroes and take on opponents as diverse as dealers, developers and colonialists. The software was developed by Andy Nicholson and released under GNU license. The work makes an intervention into traditional gaming practices by transforming generic experiences of violence and competition into the specific context of Redfern. It invites the participant to step from the confines of the game and participate – intervene – in the issues of the local community.

Zanny Begg is a Sydney based artist, curator, writer and organiser. Her work uses humour, understated drawings and found cultural artifacts to explore ways in which we can live and be in the world differently. zanny.b[at]gmail.com